Robert Heinlein once wrote that the most noble fate a man can endure is to place his own mortal body between his loved home and the war’s desolation. The line is based on the fourth stanza of our national anthem, which no one ever seems to sing at sports games for some reason.

As my series inspired by Nicole Ver Kuilen continues, I’d like to take the opportunity to remind you all that there are a hell of a lot of women who put their bodies on the line as well, and a lot of them leave pieces behind when they come home.

I was spending yet another layover at Chicago O’Hare on my way home from a business trip last month when I caught sight of a provocative painting on the wall. You don’t see a lot of pictures of beautiful, powerful-looking amputees in their underwear hanging around in airports, so I got curious and stopped to read the plaque underneath it. It turned out that I was looking at U.S. Marine Corps Sergeant Kirstie Ennis, who lost her leg in a chopper crash back in 2012.

That’s putting her injuries lightly, actually. The crash also tore her rotator cuff, damaged her spine, shattered her jaw, lacerated her face, and left her with a case of brain damage and PTSD. Her recovery took three years and required over 40 surgeries. That she was able to recover at all is a testament to the power of modern medicine. What she’s done since her brush with death on the battlefield is a testament to the power of the human spirit. Kirstie is a United States Marine, and Marines don’t quit.

As a life-long athlete, Kirstie turned to sports to get her back into fighting shape during her recovery. The same year that her leg was amputated, she participated in a 1,000 mile hike across England called Walking with the Wounded. She went on to compete in rowing, swimming, and cycling during the 2016 Invictus Games, and joined the U.S. Snowboarding Team for the 2018 Paralympics after that. Her current passion is rock-climbing. She’s the first woman with an above-the-knee amputation to reach the top of Mount Kilimanjaro, and she eventually plans to stand on top of each of the world’s Seven Summits. 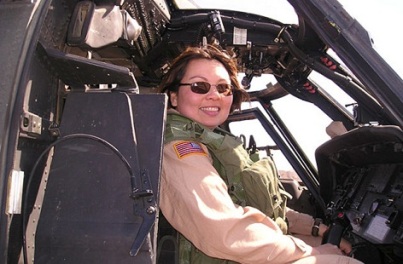 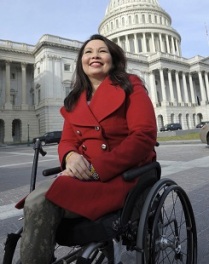 Back in the early Nineties, there weren’t a lot of combat roles for women in the United States Armed Forces. That’s why Tammy Duckworth, who comes from a long line of fighters going all the way back to the Revolutionary War, chose to train as a helicopter pilot after joining U.S. Army Reserve back in 1992. In 2004, Tammy’s unit was deployed to Iraq during the War on Terror, where her Blackhawk helicopter was struck by an RPG while on patrol. Tammy tried to land her damaged chopper, but had some trouble reaching the pedals because she’d lost both of her legs in the explosion. Fortunately, her co-pilot got the job done and pulled her from the wreckage.

Tammy recovered from her injuries at Walter Reed Army Medical Center, where OPGA’s Dennis Clark saw to her prosthetic care and rehabilitation. Unable to return to active combat duty, Tammy needed a new way to serve her country. She found it in politics. Returning to Illinois, Duckworth became the Director of the Illinois Department of Veteran’s Affairs. Her efforts got her noticed at the national level, and she was nominated by President Barak Obama to serve as Assistant Secretary of Public and Intergovernmental Affairs for the United States Department of Veterans Affairs in 2009.

She resigned her position in 2011 so that she could run for an open seat in the House of Representatives in 2012. Her election to that office made her the first disabled woman to serve in Congress. She was elected to the U.S. Senate in 2016, where her service continues today. Since her time at the VA, Senator Duckworth’s government service has been characterized by her common sense, fighting spirit, and dogged determination to do what’s best for her constituents. She’s been particularly active as an advocate for veterans, the disabled, women, and minorities. 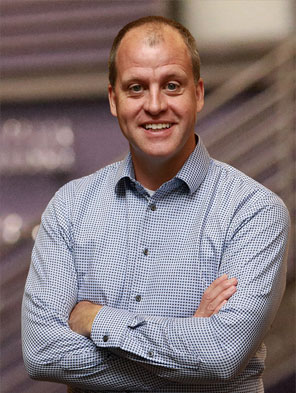 I am the CEO of VGM Group, Inc., a 100% employee-owned company with extraordinary people serving wonderful members, vendor partners, clients, patients and caregivers.