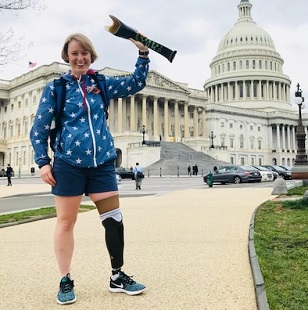 I recently had the pleasure of being visited in my office by an impressive young woman by the name of Nicole Ver Kuilen. Nicole has been named as the inaugural Health Policy & Advocacy Fellow at the National Association for the Advancement of Orthotics & Prosthetics (NAAOP), having lost her left leg to cancer at the age of ten. As she grew older, Nicole’s desire to be an athlete brought her new challenges. Obtaining a prosthesis that could meet her needs was difficult, as was navigating the financial complexities that often come with seeking prosthetic care in our country.

Nicole found herself asking a lot of questions during her sixteen years as an amputee: Why is prosthetic care so time consuming and expensive?  Why are all but the most basic of prosthetic devices often deemed “cosmetic” or “convenience” items by insurance providers? Why are people who lose their limbs under certain circumstances afforded better access to care than amputees like her who lose limbs to things like cancer? Nicole’s quest for answers led her to take a 1,500 mile jog down the west coast to raise public awareness of the issues facing American amputees. Her journey has been recorded in a documentary called 1,500 Miles, which she has used to take her message to our elected leaders in Washington and demand change.

Nicole’s story, thought leadership, drive, and sprawling list of accomplishments were a great reminder that amputees are often some of the most determined, hard-working, and impressive people around. The history of prosthetic care is packed with fascinating accounts of people like Nicole who overcame tremendous odds to make important and impactful contributions to society. Those contributions were made possible by others who saw the dignity and worth of amputees and developed the technologies and medical procedures necessary for them to live their lives to the fullest.

Inspired by Nicole’s visit, I’ll be presenting a list of people (in no particular order) who have  changed the way we look at amputees and the prosthetic care that they rely on. I’ll introduce you to a couple of people every few days until I make it through my material, so check back often!

I am the CEO of VGM Group, Inc., a 100% employee-owned company with extraordinary people serving wonderful members, vendor partners, clients, patients and caregivers.